‘Dude could make himself invisible,’ Blaze corrects Kinsey. ‘Couldn’t be “the Red” if no-one ever saw him, could he?’ He’s a black South Londoner in his late twenties, who used to be a street conjurer and retains a flamboyant taste in clothes and jewellery: he wears a silver dragon’s head ring and a baggy aubergine suit from some designer you’re not cool enough to have heard of

These days Blaze spends a lot of his time reading Arthurian texts, which is something that would have surprised him at one time. ‘Sources don’t say how. But he went round killing Arthur’s knights while no-one could see him. There’s a bunch of other stuff about the Spear of Longinus and shit, but the headline’s “Knight makes himself invisible, kills other knights”.’ 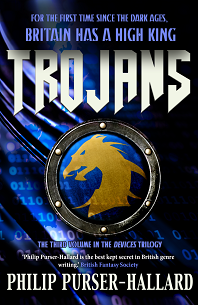